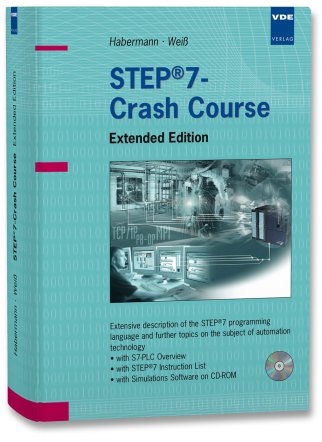 Extensive description of the STEP®7 programming language and further topics on the subject of automation technology - with S7-PLC Overview - with STEP®7 Instruction List - with S ...
(» Vollständige Titelangabe)

Büchersuche, Top 12
The programming language STEP®7 is an advanced development of STEP®5 and it is applied for the controller generation "SIMATIC® S7". The "SIMATIC® S7" is the most widely spread Programmable Logic Controller (PLC) in Europe. This book should help beginners to quickly get used to working with the programming language STEP®7. By means of numerous examples the individual topics are introduced to the reader in detail. The book does not only impart the language of STEP®7, but also the handling of control devices of the S7-300® series.
The chapters Indirect Addressing, Analog Value Processing, Hardware Configuration, Global Data Communication, Profibus DP Configuration, Ethernet Networking and Remote Maintenance are of interest for advanced learners.
Using the demo version of WinPLC7 V4(*) you can reproduce the examples on a Windows-PC. Since the simulation software (Software-PLC) is to be operated just like a real S7-PLC, the reader will simultaneously also practice the handling with a real S7 controller.
An Overview of S7 Instructions, an overview of S7- PLCs and a Glossary in the appendix complete the book.

*The time limit of 60 days can be derestricted via the Internet. By means of the demo version it is possible to enter and simulate app. 90% of the examples. Some examples are too large for the demo version.

The book addresses beginners who want to become familiar with the language of STEP®7 as well as advanced learners who want to intensify their knowledge. Thus, this book is equally suitable for students of vocational schools, students of universities, experts, technicians and masters of the areas electrical and mechanical engineering.