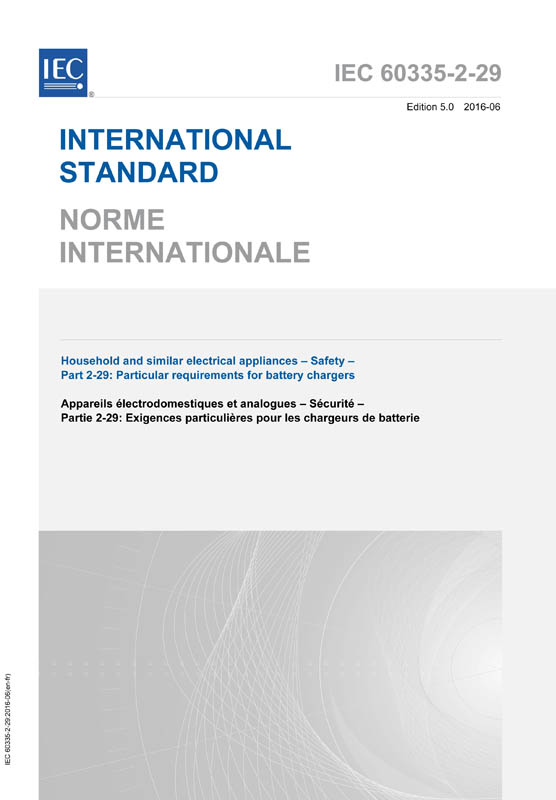 IEC 60335-2-29:2016 deals with the safety of electric battery chargers for household and similar use having an output not exceeding 120 V ripple-free direct current, their rated voltage being not more than 250 V. Battery chargers intended for charging batteries in a household end use application outside the scope of the IEC 60335 series of standards are within the scope of this standard. Requirements for battery chargers for use by children at least 8 years old without supervision are given in Annex AA. Battery chargers not intended for normal household use, but which nevertheless may be a source of danger to the public, such as battery chargers intended for use in garages, shops, light industry and on farms, are within the scope of this standard. As far as is practicable, this standard deals with the common hazards presented by appliances that are encountered by all persons in and around the home. However, in general, it does not take into account persons (including children) whose physical, sensory or mental capabilities; or lack of experience and knowledge prevents them from using the appliance safely without supervision or instruction; children playing with the appliance. This standard does not apply to built-in:
- battery chargers, except those for installing in caravans and similar vehicles;
- battery chargers that are part of an appliance, the battery of which is not accessible to the user;
- battery chargers intended exclusively for industrial purposes;
- battery chargers intended to be used in locations where special conditions prevail, such as the presence of a corrosive or explosive atmosphere (dust, vapour or gas);
- battery chargers for emergency lighting or supply units for electronic equipment. This fifth edition cancels and replaces the fourth edition published in 2002 including its Amendment 1 (2004) and its Amendment 2 (2009). It constitutes a technical revision. The principal changes in this edition as compared with the fourth edition of IEC 60335-2-29 are as follows (minor changes are not listed):
- Revised the drop test to refer to IEC 60068-2-31 (21.101);
- Requirements for supply cords on battery chargers used at low temperatures (25.7);
- Requirements for battery chargers having an output voltage exceeding SELV have been added (1, 3.2.2, 3.4.3, 10.101, 24.4, 25.5, 25.7, 25.8, 25.15. 26.5);
- A classification for battery chargers used outdoors has been added (6.2, 29.2) and some notes in Clause 1, Subclauses 7.1 and 22.102, Figure 101 and Annex AA 11.8 have been converted to normative text.It was established on the basis of the fifth edition (2010) of that standard. The attention of National Committees is drawn to the fact that equipment manufacturers and testing organizations may need a transitional period following publication of a new, amended or revised IEC publication in which to make products in accordance with the new requirements and to equip themselves for conducting new or revised tests. It is the recommendation of the committee that the content of this standard be adopted for implementation nationally not earlier than 12 months or later than 36 months from the date of its publication.Key words: Battery, Battery Charger