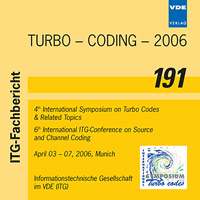 Abstract:
The text at hand presents an improved metric calculation for an Iterative Channel Data Estimation (ICDE) technique in M-ary data transmission over time-variant frequency selective channels. For low velocities, the proposed technique can work with an initial channel estimate as data detector only. In this case, the detector works similar to the M-algorithm, but with improved metric. In both cases, the advantage is that the metric averages over future symbols and thus yields results similar to detectors shortening the channel by using an allpass prefilter to obtain a minimum phase Composite Channel Impulse Response (CCIR), thus, compacting the energy of the CCIR to a few taps, and then using a reduced complexity sequence detector such as Delayed Decision Feedback Sequence Estimator (DDFSE), optionally with Reduced State Sequence Estimation (RSSE) or Adaptive State Allocation (ASA). ICDE needs no Front-End Prefilter (FEP) and has advantages in fast time-variant frequency selective channels, where a FEP, which is only block-adapted to the channel, looses some of its energy compaction capabilities with increasing velocity. These channels are typical for high speed train and automotive connections. As a concurrent receiver design, DDFSE is utilized, optionally with Per-Survivor Processing (PSP), to mitigate the effects of the time-varying channel, but cannot compensate the loss due to the block adapted FEP. We use the GSM/EDGE modulation format here, in order enable other researchers to compare their results.