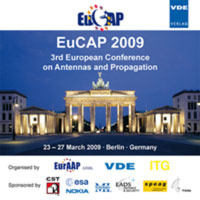 Abstract:
Asymptotic (GTD) analysis of antenna farms and of the scattering from complex and electrically large geometries is commonly used to predict installed antenna patterns on satellites and space platforms, ships, planes, and other vehicles or antennas operating in urban environments. Yet the overwhelming majority of existing commercial tools requires dedicated models or incurs in very large computational costs when a meshed geometry, like those used for integral methods, is used. Besides other possible problems, the fact alone of being forced to use several different electromagnetic models of the same object poses traceability issues and requires duplication of effort, making a complete analysis quite expensive. The Astigmatic Beam Tracer (ABT) has been updated to improve its performance with large meshed geometries (aircrafts, satellites, ships) achieving a unique modelling capability. The numerical modelling of the environment based on beam tracing (ABT) and SATIMO measurements capability have been combined in SATSim software. The updated tool has been tested on several scenes with increasing complexity and the corresponding computational cost has been evaluated, confirming the expected speed and accuracy.