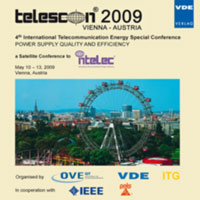 Abstract:
Today, lead-acid batteries are the most common choice for battery backup of communication equipment power systems. In recent years, however, a demand for a more compact power supply is growing amid expectations for spreading use of the NGN. Lithium ion batteries, which feature high energy density, are expected to greatly contribute to such reduction of power supply size. Improved safety and longer lifetime are indispensable for use of lithium ion batteries in power supply facilities for communication equipment. When manganese-based active material is used for the positive material, manganese eluted from the positive electrode migrates to the negative electrode surface, where it reacts with lithium ions to deactivate the lithium. That phenomenon has been confirmed to decrease battery capacity. Therefore, to extend battery life, we investigated the elution characteristics of manganese ions from the positive electrode by using test samples in which the elemental manganese of the positive material is partially replaced with some other metal element. The results show that there is least elution of manganese from the positive electrodes of lithium ion batteries that use manganese-based pasitive materials when the manganese is replaced by magnesium. With the objective of higher battery safety, we also investigated the elution characteristics of manganese ions from the positive electrode for when a phosphazene-based flame retardant has added to the electrolyte solution. The results show that the flame retardant in electrolyte decomposes during long-term storage to generate fluorine compounds, which have been confirmed to accelerate the elution of manganese ions. We also learned that decomposition of the flame retardant is related to the stability of the electrolyte, so elution of the manganese ion can be controlled by using a stable electrolyte.