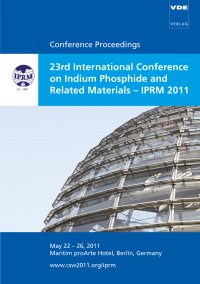 Abstract:
The epitaxial overgrowth, employed in the fabrication of conventional buried gratings, is avoided by using lateral corrugations of the ridge-waveguide as surface gratings, thus decreasing the fabrication complexity, increasing the yield and reducing the fabrication cost of distributed feedback and distributed Bragg reflector edge-emitting lasers. Single- and multiple-contact edge-emitting lasers with laterally-corrugated ridge waveguide gratings have been developed both on GaAs and InP substrates with the aim to exploit the photon-photon resonance in order to extend their direct modulation bandwidth. The characteristics of such surface-grating-based lasers emitting both at 1.3 and 1.55 µm are presented, including photon-photon-resonance-extended small-signal modulation bandwidth in excess of 20 GHz achieved with a 1.6 mm long single-contact device under direct modulation. Similarly structured devices, with shorter lengths are expected to exceed 40 GHz small-signal modulation bandwidth under direct modulation.