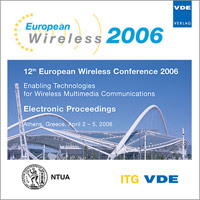 Abstract:
In this work, we present an event-based simulator for wireless networks using the Java programming language. Special focus has been placed on scalability and modularity of the implementation. Indeed, the new test-bed can support easily up to 10000 nodes; at the same time the different components interact with each other with well-defined interfaces permitting separate and independent modification. Even though the simulator can be used for any ad hoc wireless network, we have concentrated on the more energy-limited and constrained sensor networks. The supported physical model includes the use of directional antennas, enabling the switching of the antennas’ lobe at will and the finding of direction of arrival (DoA) of the signal. Two variants of Aloha and one CSMA are the major MAC protocols implemented. At the network layer, emphasis was given on SPEED and its enhancements. Finally, the user is provided with a configuration file to set its inputs, an excel output file holding all the statistics of the simulation and an interactive GUI showing the flow of information across the sensor nodes. Finally, the simulator was tested in terms of speed and memory demands, and the results of our simulations were compared against those of other research groups.