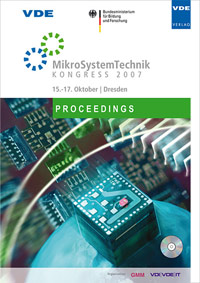 Abstract:
For decades, recordings from the brain have been performed to investigate the activity of individual neurons. However, the complex interactions between electrical and chemical signals with respect to short and long term changes of morphology and information transfer of large cellular networks are still poorly understood. In an effort to provide new tools to investigate related questions, this paper introduces a new modular approach for multifunctional probe arrays with high special resolution for cerebral applications. The approach allows the individual assembly of probes into three-dimensional arrays to address specific brain regions, including sulci of highly folded cortices such as those of humans. We introduce a system approach allowing for the integration of recording and stimulation electrodes as well as microfluidics and integrated microelectronics, all sharing a common slim backbone. We present the first prototypes of (i) probes with multichannel electrodes, (ii) probes with fluidic functionality realized using deep reactive ion etching combined with silicon fusion bonding and wafer grinding, (iii) highly flexible polyimide ribbon cables and the respective assembly technology, (iv) a backbone platform that allows to assemble the electrodes to three-dimensional electrode arrays and (v) the first telemetry unit. In contrast to existing systems, this new approach enables the following features: (i) compatibility with a floating device operation due to a flexible ribbon cable, (ii) possibility to assemble probes of multiple lengths and configurations, (iii) opportunity to assemble probes of different functionalities (drug delivery, biosensors) along with electrical probes for recording and stimulation as well as (iv) scalability nearly independent of the probe technology.