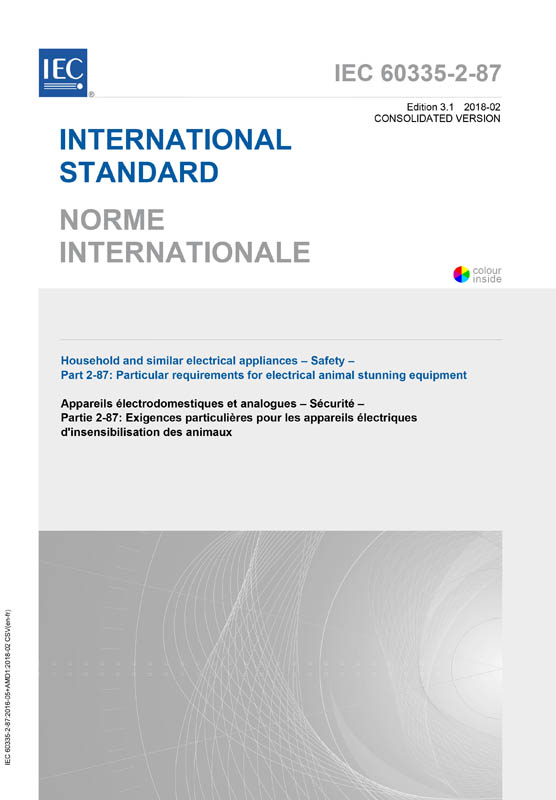 IEC 60335-2-87:2016+A1:2018 deals with the safety of electric animal-stunning equipment the rated voltage of which is not more than 250 V for single-phase appliances and 480 V for other appliances. Battery-operated appliances and other d.c. supplied appliances are within the scope of this standard. Dual supply appliances, either mains-supplied or battery-operated, are regarded as battery-operated appliances when operated in the battery mode. This standard is applicable to electric animal-stunning equipment for industrial or commercial use, for use on farms or for use in areas where they may be a source of danger to the public. So far as is practical, this standard deals with the common hazards presented by these types of appliances. Examples of electric animal-stunning equipment within the scope of this standard are those used to stun:
- bovines such as cattle, calves, cows, heifers and bulls;
- ovines such as sheep and lambs;
- caprines such as goats;
- cervids such as deer;
- solipeds such as horses, donkeys and mules;
- birds such as chickens, turkeys and guinea fowl;
- porcines such as pigs;
- fur animals such as foxes, chinchilla, rabbits and possums;
- mustelids such as mink and polecats and other ruminants such as camels. The following types of electric animal-stunning equipment are covered by this standard: manual, semi-automatic and automatic. This third edition cancels and replaces the second edition published in 2002 including its Amendment 1 (2007) and its Amendment 2 (2012). This edition constitutes a technical revision. The principal changes in this edition as compared with the second edition of IEC 60335-2-87 are as follows (minor changes are not listed):
- Warning sign ISO 7010-W012 has been introduced (7.1, 7.6, 7.12, 7.14).
- Reference to IEC 60068-2-32 has been replaced by reference to IEC 60068-2-31 (21.1).
- Additional requirements for battery operated stunning have been transferred to Annex S (5.8.1, 7.1, 7.8, 7.12, 11.5, 16, 22.102, 25.5, 25.7, 25.20, 25.23, 25.101, 26.5). It was established on the basis of the fifth edition (2010) of that standard. The attention of National Committees is drawn to the fact that equipment manufacturers and testing organizations may need a transitional period following publication of a new, amended or revised IEC publication in which to make products in accordance with the new requirements and to equip themselves for conducting new or revised tests. It is the recommendation of the committee that the content of this standard be adopted for implementation nationally not earlier than 12 months or later than 36 months from the date of its publication. This publication is to be read in conjunction with IEC 60335-1:2010. This consolidated version consists of the third edition (2016) and its amendment 1 (2018). Therefore, no need to order amendment in addition to this publication.

65.060.99
Other agricultural machines and equipment