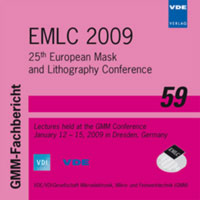 Inhalt:
Within the frame of the European R&D project the so called “HYMNE” project, lead by STM, advanced vacuum decontamination processes had been demonstrated to be efficient on wafer substrates in order to remove airborne molecular contamination (moisture, VOC..), to avoid crystalline defects after dry etching process and to improve yield for sub 90 nm technologies. Further to these significant results on wafers, a pool of partners investigated new methods and processes based on vacuum technology for photomask decontamination. These studies were carried out in the frame of the European R&D CRYSTAL project, focusing on photomask defect reduction. Today, vacuum process is not very widespread in photomask environment: in fab environment nor in mask manufacturing cycle. However such vacuum substrate decontamination could be also efficiently applied in order to reduce AMC contamination, which is one of the root causes of haze and crystalline defects. In this paper, we report for the first time, vacuum process investigations on pellicled photomasks that could be applied in fab environment, as well as vacuum process investigations on patterned blank that could be integrated into mask manufacturing cycle. First, vacuum process had been investigated on pellicled photomasks, including parameter influences. Goal is to renew and replace the environment under the pellicle by clean environment. During the process, specific care has to be taken on pellicle behavior under vacuum. The challenge is indeed to manage the pellicle during the vacuum process without damaging it, especially after several decontamination cycles. Finally, repeatability tests have also been successfully carried out and will be reported. We also report advanced vacuum process on patterned blank that could be integrated into mask manufacturing flow. Such procedure is an efficient complementary process in order to outgas contaminants from photomasks, and in order to reduce AMC residues (especially sulfate) in mask manufacturing cycle. Experimental results will be reported. Integration of such vacuum decontamination process during photomask lifetime could be considered.