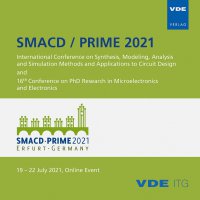 Inhalt:
High-density CMOS-based Multielectrode Arrays (MEA) provide thousands of channels to record extracellular electrical activity of neuronal networks. Such a high channels count generates an amount of data that is difficult to manage with long-term fully implantable neural interfaces, where power and data transmission are provided wirelessly. To overcome this limitation, a low resources digital signal processor able to reduce the amount of transmitted data to a relevant subset represented by the spiking activity is essential. Unfortunately, the resources required to detect spikes linearly grow with the number of channels, limiting the total amount of MEA pixels in these devices. This work presents a method, here called Spike Detection-by-Difference (SDD), to drastically reduce this limit, for real-time spike detection with an impact on resources and consumption independent from the total channels count. It exploits the high resolution of MEAs to separate the highly localized extracellular action potential from the large-scale local field potential. The SDD is compared with the standard spike detection approaches as the Threshold Crossing (TC) and the Nonlinear Energy Operator (NEO). The detection accuracy is compared for different spiking amplitudes on a synthetic dataset generated from real recordings, showing a detection accuracy of 90% for spikes as low as 45 muV, with a noise in the frequency band from 300 Hz to 5 kHz of 10 muVrms. Furthermore, the resource consumption shows a reduction of the 91,5% compared to the TC and of 94% compared to the NEO on a 32x32 pixels matrix. This reduction can be further accentuated increasing the matrix size or reducing the number of columns.