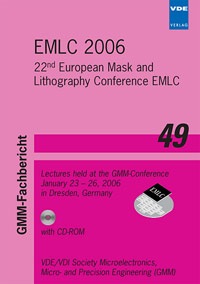 Inhalt:
The specification of the mask mean-to-target (MTT) and uniformity is related to functions as: mask error enhancement factor, dose sensitivity and critical dimension (CD) tolerances. The mask MTT shows a trade-off relationship with the uniformity. Simulations for the mask MTT and uniformity (M-U) are performed for LOGIC devices of 45 and 37 nm nodes according to mask type, illumination condition and illuminator polarization state. CD tolerances and after develop inspection (ADI) target CD’s in the simulation are taken from the 2004 ITRS roadmap. The simulation results allow for much smaller tolerances in the uniformity and larger offsets in the MTT than the values as given in the ITRS table. Using the parameters in the ITRS table, the mask uniformity contributes to nearly 95% of total CDU budget for the 45 nm node, and is even larger than the CDU specification of the ITRS for the 37 nm node. We also compared the simulation requirements with the current mask making capabilities. The current mask manufacturing status of the mask uniformity is barely acceptable for the 45 nm node, but requires process improvements towards future nodes. In particular, for the 37 nm node, polarized illumination is necessary to meet the ITRS requirements. The current mask linearity deviates for pitches smaller than 300 nm, which is not acceptable even for the 45 nm node. More efforts on the proximity correction method are required to improve the linearity behavior.