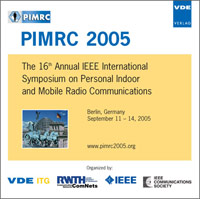 Inhalt:
With the increasing heterogeneity of Internet enabled devices and Internet access technologies, media content may often need to be adapted to best meet the user or application needs. However, server-side adaptation has shown its limitations, leading to the development of network-side adaptation techniques. Overlay Networks have emerged as a possible solution to enable data processing between users and the content server, as it allows to transparently include media processing nodes into the end-to-end media path. Nevertheless, to deal with multimedia streams in an efficient way, current proposals lack application awareness when it comes to routing decisions. Typically overlay networks only consider IP header information when routing packets. In this paper we introduce a new concept that shall enable media aware routing via the use of overlay networks. The proposed routing approach considers service and application information to improve routing decisions based on the user/application requirements. In our proposal, service-specific overlay networks (SSONs) are created for every service, which allows customisation of the network resources. SSONs include overlay nodes with adaptation capability. The data routing in the SSON is performed using the media aware overlay routing logic. This paper presents the concept, along with a proposed architecture designed to provide a media aware routing service. The advantage of the proposed functionality is illustrated based on a mobile user scenario.