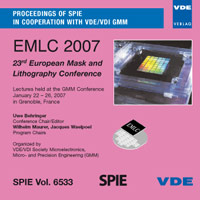 Benchmark and gap analysis of current mask carriers vs future requirements: example of the carrier contamination

Inhalt:
In the frame of the European Medea+ 2T302 MUSCLE project, an extensive mask carriers benchmark was carried out in order to evaluate whether some containers answer to the 65nm technology needs. Ten different containers, currently used or expected in the future all along the mask supply chain (blank, maskhouse and fab carriers) were selected at different steps of their life cycle (new, aged, aged&cleaned). The most critical parameters identified for analysis versus future technologies were: automation, particle contamination, chemical contamination (organic outgassing, ionic contamination), cleanability, ESD, airtightness and purgeability. Furthermore, experimental protocols corresponding to suitable methods were then developed and implemented to test each criterion. The benchmark results are presented giving a "state of the art" of mask carriers currently available and allowing a gap analysis for the tested parameters related to future needs. This approach is detailed through the particular case of carrier contamination measurements. Finally, this benchmark / gap analysis leads to propose advisable mask carrier specifications (and the test protocols associated) on various key parameters which can also be taken as guidelines for a standardization perspective for the 65nm technology. This also indicates that none of tested carriers fulfills all the specifications proposed.