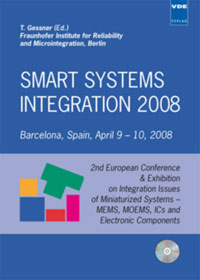 Inhalt:
Aircrafts are submitted to mechanical and environmental stresses during their flights, especially during take-off and landing. Consequently, damages as cracks appear in their structures. To detect them, huge visually inspections are realised after 2400 hours of flight. It consists in removing panels to reach metallic structures, usually inaccessible. The inspection drawbacks are the costs, the durations and the relevance. To improve the structure monitoring, the Structural Health Monitoring (SHM) aims at developing smart embedded systems, including sensors and smart processing, able to monitor continuously the structures during aircraft flights or at ground. Figure 1 presents one possible scenario. Several parameters have to be taken into account for such a system: first of all, it should be as small as possible to be placed in tiny and sensitive areas. Then, the system has to be self-sufficient to have a minimum of 2 years of autonomy. Moreover, the data have to be analysed in real-time and stored in memory to know directly the health of the structures during the line checks. A radio link permits the exchange of information between the systems and the outside. The improvements of this network of systems, such as the autonomy, the radio link communication and the low power consumption are being developed under the Silicon platforms for Wireless Advanced Networks of Sensors (SWANS) European project. This kind of system directs people who perform the structure control: only locations where defaults have been detected are checked, avoiding the removal of all the panels. Consequently, the costs and the duration of the line check will be reduced. Moreover, the beginning of the crack and its development is well known with such a system, thanks to a continuous monitoring. Therefore, the quality of the survey is increasing. This paper, describes, in details, the dedicated smart embedded system able to monitor continuously the metallic structures, by the use of eddy current foil sensors. A description of this smart system is realised, followed by a proof of concept and the detailed results. Then, the networking is presented, to extend the application to all the sensitive areas of an aircraft. Finally, conclusions and ways of improvements are given.