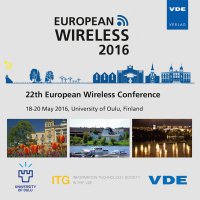 Inhalt:
This paper proposes a new factor graph (FG) geolocation technique utilizing differential received signal strength (DRSS) for location detection of a single static unknown (anonymous) radio wave emitter. The use of DRSS-based FG (DRFG) technique is to solve the problem of conventional received signal strength (RSS)-based FG (RFG) technique which is unable to estimate the position of a single static unknown radio wave emitter without the knowledge of its transmit power knowledge. However, in practice, the transmit power information from the signal transmitted by the unknown target emitter is unavailable. It should be noticed that the knowledge of the transmit power of the target is necessary for calibration/reference of the RSS values of training signal sent from the monitoring spots. In this paper, we propose a new DRFG technique to eliminate the necessity of transmit power information, and hence this technique successfully estimates the position of an unknown radio emitter. The performance of the proposed technique is evaluated in the terms of root-mean-square error (RMSE). The results confirm that the proposed technique accurately estimate the location of unknown target, while the conventional RFG fails when the transmit power of monitoring spots are unequal to the transmit power of the unknown target.